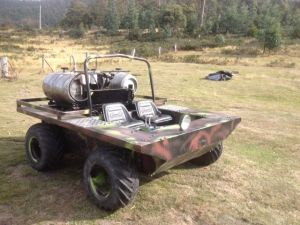 In case you missed it there are currently two Wildcats for sale on GUMTREE. The first is Alan’s Wildcat full details of which are on this site. The other is one that surfaced a a while ago and is now advertised again. It’s interesting in that it has had a hydraulic update and an engine conversion in the not too distant past. If you read the ad the owner explains that whoever rebuilt it removed the original remotes, spools and pump so the machine currently functions for transport and towing. If you were looking at a rebuild/conversion as a project at a negotiable $3900 this machine would be a good start, presuming the re-engineering lends itself to reinstating full hydraulic functionality. (that is…installing ancilliary pump etc. on the current set up).

There are quite a few pics on Gumtree. From the looks of them the motor is water cooled. You can get a few glimpses of the running gear if you look hard enough.

The front implement bar at the front and the ram attachment points on the both ends have been removed. One implement bar remains which could be relocated or replicated and  the ram mount points are not hard to fabricate…..’

There are a few more pics from 2013 at the bottom of this page.

Bruno Rime from Tasmania has been on the lookout for a Wildcat. He contacted the owner of the machine above and talked about the modifications and knidly let me know the following:
“I did get to talk to the other owner with the rebuilt Wildcat. If I understood what he said correctly it was running something like a Holden Barina engine with a fixed displacement pump powering two variable motors. He seemed like a top fellow and very knowledgeable, unfortunately his Wildcat was sold before I could get the chance to look at it.”

This entry was posted in HOME. Bookmark the permalink.