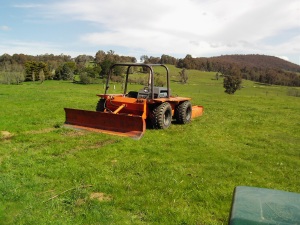 Back in 1982 I bought a Williames Wildcat to use on a property I owned at Batlow NSW.  It was powered by an ancient Wisconsin V4 motor and was very hard on the ears.  I had a few initial problems involving the original chain. One side had been converted to a larger and more robust chain, the other was the original version and kept breaking at when stressed.  I ended up doing a bit of work on that side, replacing the chain with a better quality and then rpelacing the two wheel sprockets with new units.  That fixed the situation although that side of the machine needed a lot more regular tensioning that the other. I was really pleased with the way that it slashed blackberry and moved fallen logs.

I was also pretty amazed at the simple logic of the power unit/hydraulic set up.  Remove a few bolts and you can lift the whole lot out as one unit – try doing that in your Austrak!!

Anyway when I sold the property I sold the Wildcat. It eventually ended up in Melbourne. If you see a red rusting hulk around the place it could well be mine. I repainted it…wish I hadn’t!

Prior to buying the Wildcat I had some contact with Geoff Williames, who at that time was marketing the new SuperCat (Supacat?). He was a great guy to speak with and sent me a heap of info about my machine for nothing….only a few years back when I enquired at Williames HiTech they generously offered to build me a new Wildcat….now I took a breath and thought that my pockets were not deep enough for that.

I ended up finding a site which is now defunct on which there was a fair bit of discussion about Austrak RT45’s and it was through that contact that I found a machine in Eildon Vic which I ended up purchasing to use on my property near Tumbarumba NSW…after a 20 year gap of not having a property. Through that site I also made contact with Jim Deering in Gippsland who has been a huge support. I don’t think there is much Jim does not know about Austrak.

In the last few years I have had contact with a number of other owners.  Out of that we have mapped Austrak machines in Gippsland Vic, Otways Vic, South West Slopes NSW, South Coast NSW, North West Tablelands NSW and Tasmania plus one or two who haven’t given a location. Most recently a newer Austrak popped up on Trading Post complete with FEL and Backhoe …only to be sold almost instantly.

I also was contacted by a fellow in the Otways who had converted his Wildcat to a Subaru EA81 motor…a really elegant solution. I can supply the photos if poeple are interested.

My saga with the Austrak has been interesting. I had some major issues a couple of years back which cost me about $2500 to rectify. One side started making a noise like there was someone inside with a five pound hammer. In the end the repairer was scratching his head about just how he had fixed it and pulled up just shy of admitting what Jim Deering had much earlier opined about it being caused by air in the lines. I think Jim was absolutely correct.

Anyway that’s my story I hope you will comment with your own……..